Helping you build Agile IT Teams : Experts in IT Project Resource Management & Planning

Certes began in 1983 as an IT development company.  As the business took off and established itself, clients began to request access to further expert resources.  These were deployed within the clients' own businesses, including internationally.  Certes responded to these demands and expanded, including  setting up a European subsidiary to provide bespoke software teams into organisations in France, Germany, Italy, Spain and the Netherlands.  In 1994 Certes became recognised as a specialist IT recruitment business.  As its evolution continued, in 2015 Certes expanded further and, with a nod to its roots, began offering capability services specialising in agile and digital projects.

Certes has become one of the leading experts in delivering IT service solutions, having worked with public, private and partner organisations to deliver strategic resources for digital transformations. 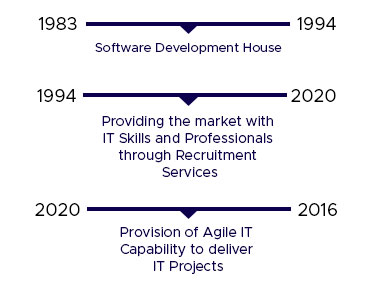 The Launch of IT Agility Ability™

The success of the Proof of Concept from 2016 has resulted in a fully formed division now launched as IT Agility Ability™, where at Certes we supply IT Agile teams and have expanded our core offering to still provide expert IT resource that can be accessed in a number of ways, to best suit your organisational needs.

The market has evolved and many of our clients and IT professionals trust us to deliver expert IT resource.  In 2016, we moved our business to start the development of a Proof of Concept (POC) Turnkey Solution – which was a solution providing IT Capability as a managed service model.

In 2009, in our ongoing commitment to our network of IT Professionals and our expertise in this area, we formed Grad Central which was developed to provide Graduates their first job opportunities by packaging recruitment into a service from supply to the full on-boarding process.

Rolling on into 2003, Certes worked diligently to develop our business model and we were awarded tenders on the Government frameworks.  In 2003 we became a major supplier to Central Government to build up capacity for supplying security-cleared IT Consultants.

1998 was an exciting year for Certes, as we expanded further in both people and offices.  In 1998 we were named Preferred Supplier to major international organisations such as Hewlett Packard and Glaxo Smith Kline.  This was a landmark year for us.

Due to continued popular demand and requests from our clients, in 1994 we converted the business into an IT Specialist Recruitment business and provided permanent recruitment services.

A year later in 1992, Certes formed a European subsidiary to provide bespoke software teams into France, Germany, Italy, Spain and the Netherlands.

By 1991, Certes formed a division that provided IT bespoke software in open systems (Unix, Windows, etc).

In 1987 we formed another software company providing the same service on a Digital Equipment Corporate propriety platform.

In 1984, Certes were awarded our first exclusive large project for the UK coastguard (Trinity House).

Certes was established in 1983 as a software house providing customised bespoke software to organisations, based on a Hewlett Packard propriety platform.